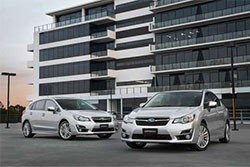 The first model to be built on the new Subaru Global Platform, fifth generation Impreza offers an array of new technologies that greatly enhance all-round safety, as well as dynamics and quality.

In its first month of sales in Japan, new Impreza out-performed its monthly sales target of 2500 more than four-fold, with 11,050 orders.

Subaru in Japan says demand from customers switching from other brands has been especially notable, representing 51% of all orders - indicating that new Impreza is attracting an ever-wider range of customers.

“It is a great honour that the Impreza has been recognized with this distinctive award,” said Yasuyuki Yoshinaga, President and CEO of Fuji Heavy Industries, the maker of Subaru vehicles.

“I would like to thank our customers, suppliers and shareholders for their continued support for Subaru and I am grateful to all those who contributed to this achievement. We will continue to enhance our efforts to offer an ‘enjoyment and peace of mind’ driving experience to all customers.”

It is the second time Subaru has been awarded the Car of the Year Japan honour, following the win by Legacy (known as Liberty in Australia) in 2003.

Australian specification Imprezas are appearing in showrooms now, with deliveries starting during this month.

Available exclusively with a Continuously Variable Transmission (CVT) Impreza 2.0i sedan is priced from $22,400 MLP – the same as the superseded model, but with considerable upgrades to specification.

*Prices are Subaru (Aust) Pty Limited’s Manufacturer’s List Prices only and include GST on the list price but exclude dealer delivery charges and all other government and statutory charges. For the drive away price of Subaru vehicles consumers should be advised to contact their local authorized Subaru dealer.