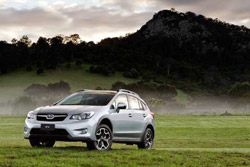 The All-Wheel Drive (AWD) Subaru XV has been named ‘SUV of the Year’ by 4x4 Magazine in the United Kingdom.

Putting the XV through its paces, both on and off-road, 4x4 Magazine crowned the XV its class winner in one of the hardest-fought categories in a special ‘4x4 of the Year’ issue. The UK SUV market has expanded rapidly in recent years with the proliferation of compact crossovers, and 4x4 Magazine placed Subaru’s latest AWD model ahead of key rivals from Audi, Kia, Mazda, Nissan and Volkswagen.

The judging panel, comprised of members of the magazine’s editorial team, praised the XV’s ‘enjoyable’ and ‘involving’ drive, fuel economy and off-road ability.

Commenting on the XV’s victory, Nigel Fryatt, Editor, 4x4 Magazine, said: “The SUV class in 4x4 Magazine’s 4x4 of the Year test is one of the most competitive. The Subaru XV was an interesting new arrival in that class, which did much to impress judges.

“For a vehicle which obviously spends most of its time on-road, it is such an enjoyable drive, involving the driver in a positive manner. It also boasts promising fuel economy potential. When we took it off-road, given the obvious limitations of ground clearance, the Subaru completed our test route with ease.”